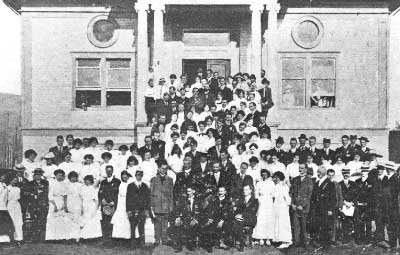 The year was 1911, and it was such an exciting time. Charlie Chaplin, age 22, and not yet world famous, appeared at the Orpheum in Vancouver. Wallace Shipyards, the major employer in North Vancouver, was destroyed by fire, and rebuilt almost immediately. North Vancouver Ferry No. 3 was launched from Wallace Shipyards, the first self-propelled boat of any size to be built in North Vancouver. The North Vancouver Tennis Club held its opening tournament on its courts at 23rd and Lonsdale, the site of the present Harry Jerome Recreation Centre. Construction began on the Tea House at the Capilano Suspension Bridge, and on North Vancouver’s new Municipal Hall on Lynn Valley Road (then known as Pipeline Road) on land purchased from Jack Nye. Squamish Chief Simon Baker was born on the Capilano Reserve and nine year old Nat Bailey arrived in Vancouver with his family from Seattle. He would eventually launch the White Spot restaurant chain. Wisconsin born Julius Harold Bloedel began logging in B.C., Pauline Johnson published Legends of Vancouver, and a group of pioneers in Lynn Valley had organized and were busily serving the growing community and meeting in the Institute Hall on what is now the Lynn Valley Elementary School grounds and ball park. And this just covers a few of the exciting things happening!

The name of the organization changed over the years, until a motion was passed at a meeting in 1977 that the organization be known as Lynn Valley Community Association. It remains so to this day. Over the years many,  caring, community-minded Lynn Valley residents have served on the Executive and membership, and LVCA has been involved in many aspects of the community according to the needs of the times.

Just to mention a few community issues the LVCA has been involved with over the years: Youth programs, Official Community Planning and Development, the preservation of Lynn Canyon Park, and of bears and streams, Lynn Valley Day, and more recently the 2010 Olympic and Valley Fest events (including the popular Concert Series) held at Lynn Valley Village for which they received Awards from the District of North Vancouver.

As fate would have it, LVCA now operates from and holds its meetings at Mollie Nye House. Mollie was the daughter of Jack Nye mentioned in the first paragraph. Jack was very active in the community and a member of the Lynn Valley Ratepayers Association. LVCA continues to work with, and for the community of Lynn Valley.